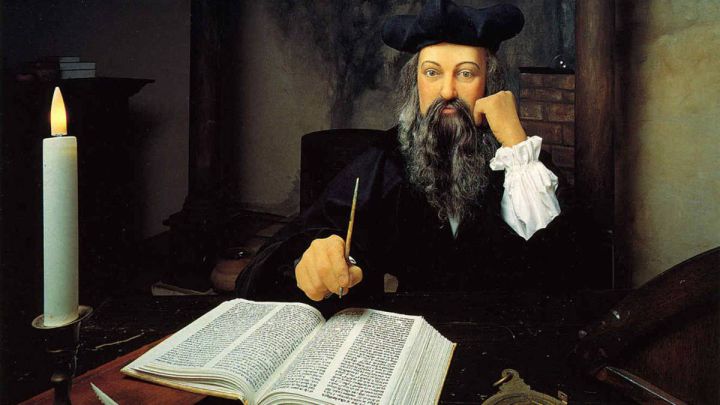 Michel de Nostredame, usually Latinised as Nostradamus, was born on the 14th of December, 1503 in Saint-Rémy-de-Provence, France. He was a French astrologer, physician and reputed seer, who is best known for his book “Les Prophéties”.

Nostradamus believed that he could predict the future and published his predictions in the book “Les Prophéties”. The book was first published in 1555. Nostradamus attracted many supporters, who, along with much of the popular press, credit him with having accurately predicted many major world events. He died on the 2nd of July, 1566 in Salon-de-Provence, France.

Below, you will find a collection of famous Nostradamus quotes, prophecies and predictions.

In Germany, a new sect shall be born which shall renew ancient pagan times.― Nostradamus Quote
The year 1999, seventh month, from the sky will come a great King of Terror: to bring back to life the great King of the Mongols, before and after Mars to reign by good luck. The present time together with the past will be judged by the great Joker: the world too late will be tired of him, and through the clergy oath-taker disloyal. The year of the great seventh number accomplished, it will appear at the time of the games of slaughter: not far from the great millenial age, when the buried will go out from their tombs.― Nostradamus Quote
A common soldier will make an empire, but he will eventually meet his fate and be condemned to the Great Rock.― Nostradamus Quote
A great stench will come from Lausanne, but they will not know its origin; they will put out all people from distant places, fire seen in the sky, a foreign nation defeated.― Nostradamus Quote
That which neither weapon nor flame could accomplish will be achieved by a sweet speaking tongue in council.― Nostradamus Quote
When twenty years of the Moon’s reign have passed another will take up his reign for seven thousand years. When the exhausted Sun takes up his cycle then my prophecy and threats will be accomplished.― Nostradamus Quote
Will the future bring your wisdom to me? Or will darkness rule the kingdom for all eternity? You will live in my heart… I will still remember even though we are apart. I will feel you there for me As I walk the road of life You help me fight for what is right I will honour thy name― Nostradamus Quote
After there is great trouble among mankind, a greater one is prepared. The great mover of the universe will renew time, rain, blood, thirst, famine, steel weapons and disease. In the heavens, a fire seen― Nostradamus Quote
To an old leader will be born an idiot heir, weak both in knowledge and in war.― Nostradamus Quote
From the calm morning, the end will come when of the dancing horse the number of circles will be nine.― Nostradamus Quote
Nothing in the world can one imagine beforehand,not the least thing,everything is made up of so many unique particulars that cannot be forseen.― Nostradamus Quote
The third big war will begin when the big city is burning― Nostradamus Quote
The Antichrist will be the infernal prince again for the third and last time… so many evils shall be committed by the means of Satan, the infernal Prince, that almost the entire world shall be found undone and desolate. Before these events happen, many rare birds will cry in the air, ‘Now! Now!’ and sometime later will vanish.― Nostradamus Quote
A great war shall burst forth from fishes of steel. Machines of flying fire, lobsters, grasshoppers, mosquitoes. The mass attacks shall be repulsed in the woods, when no child in Germany shall obey any longer.― Nostradamus Quote
“Entonces triunfará María, Madre de Dios (a la que Nostradamus indica como una curiosa perífrasis, siendo «maría» el plural del nombre latino «mare»), de la cual se ha dicho que «las puertas del Infierno no prevalecerán contra ella».” ― Nostradamus Quote
In England, one without a trace of Royalty will master. Twenty months he will rule; twenty months he will bleed the lands, then his end comes quickly.― Nostradamus Quote
Sooner and later you will see great changes made, dreadful horrors and vengeances. For as the Moon is thus led by its angel, the heavens draw near to the Balance.― Nostradamus Quote
The great empire will be torn from limb, the all-powerful one for more than four-hundred years: Great power given to the dark one from slaves come.― Nostradamus Quote
We need god to prosper those without him will not.― Nostradamus Quote
Tomorrow at sunrise I shall no longer be here.― Nostradamus Quote
The body without soul is no longer at the sacrifice. At the day of death it come to rebirth. The divine spirit will make the soul rejoice seeing the eternity of the world.― Nostradamus Quote
Come the millennium, month 12, In the home of greatest power, The village idiot will come forth To be acclaimed the leader.― Nostradamus Quote
“Romano Pontífice, guárdate de acercarte A la ciudad regada por dos ríos: Tu sangre vendrá allí cerca a esputar, Cuando florezca la rosa, tú y los tuyos.” ― Nostradamus Quote
Mankind will discover objects in space sent to us by the watchers..― Nostradamus Quote
In the City of God there will be a great thunder, Two brothers torn apart by Chaos, while the fortress endures, the great leader will succumb, The third big war will begin when the big city is burning― Nostradamus Quote
Understanding created by the intellect cannot be acquired by means of the occult, only by the aid of the zodiac, bringing forth that small flame by whose light part of the future may be discerned.― Nostradamus Quote
The great earthquake shall be in the month of May; Saturn, Capricorn, Jupiter, Mercury in Taurus; Venus, also Cancer, Mars in zero.― Nostradamus Quote
The present time, together with the past, shall be judged by a great jovialist.― Nostradamus Quote
Five and forty steps the sky will burn. Fire approaching the large new city. Instantly a great thin flame will leap, when someone will want to test the Normans.― Nostradamus Quote