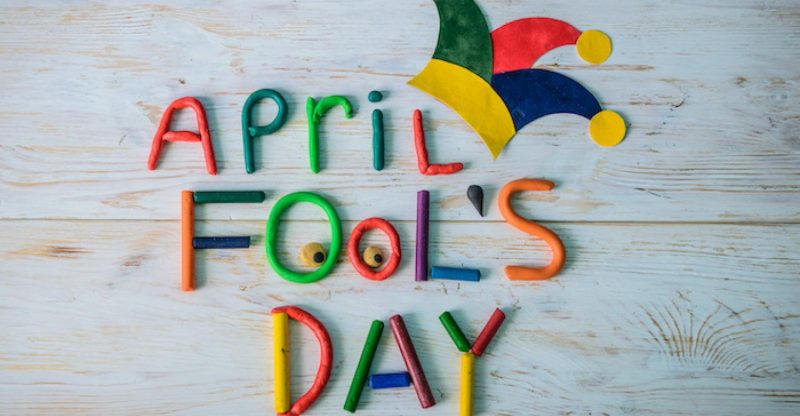 Below, you will find our collection of fools day quotes and sayings. Share with your friends and loved ones and give them a perfect reason to smile on fools day.

The first of April is the day we remember what we are the other 364 days of the year. – Mark Twain
Here cometh April again, and as far as I can see the world hath more fools in it than ever.__Charles Lamb
A fool may have his coat embroidered with gold, but it is a fool’s coat still. – Antoine de Rivarol
Today is the best day to propose to her. If she accepts, perfect, if not just say its April Fools. _ANONYMOUS
Take all the fools pout of this world and there would not be any fun living in it, or profit. – Josh Billings
Mix a little foolishness with your prudence: It’s good to be silly at the right moment. – Horace
Fortune, seeing that she could not make fools wise, has made them lucky. – Michel de Montaigne
“Some people can’t be fooled on April Fool’s Day because they were fooled too many times during their entire lifetime.”― Akash B Chandran
“April Fools’ is the only day to take people seriously.”― Criss Jami
If you want to avoid fools, skip April 1st, Hope you will manage, see you on April 2nd.
“April hath put a spirit of youth in everything.”- William Shakespeare
A mother takes twenty years to make a man of her boy, and another woman makes a fool of him in twenty minutes. – Robert Frost
We’re fools whether we dance or not, so we might as well dance. ~Japanese proverb
“I’m not a fan of April Fools’ Day. I can take a joke; I just don’t want to BE the joke.”― Stewart Stafford
The compliments of the season to my worthy masters, and a merry first of April to us all – Charles Lamb
A common mistake that people make when trying to design something completely foolproof is to underestimate the ingenuity of complete fools. – Douglas Adams
A fool thinks himself to be wise, but a wise man knows himself to be a fool._William Shakespeare
If you would avoid all fools go into a dense forest and there refrain from gazing into still pools. ~Austin O’Malley
Hello April, Kindly don’t fool me.
It is human nature to think wisely and act foolishly. – Anatole France
For fools rush in where angels fear to tread. – Alexander Pope
Silence is the wit of fools. – Jean la Bruyere
Don’t approach a goat from the front, a horse from the back, or a fool from any side. – Jewish Proverb
“Reader, if you wrest my words beyond their fair construction, it is you, and not I, that are the April Fool.”― Charles Lamb
Every fool finds a greater one to admire them. – Nicolas Boileau
Controversy equalizes fools and wise men… and the fools know it. – Oliver Wendell Holmes, Jr.
You will do foolish things, but do them with enthusiasm. – Sidonie-Gabrielle Colette
Let us be thankful for the fools.but for them the rest of us could not succeed . – Mark Twain
I hope life isn’t a big joke, because I don’t get it. – Jack Handey
A fool flatters himself, a wise man flatters the fool. – Edward G. Bulwer-Lytton
A fool sees not the same tree that a wise man sees. – William Blake
A spoon does not know the taste of soup, nor a learned fool the taste of wisdom. – Welsh Proverb
April Fools gone past, and you’re the biggest fool at last.- Unknown
I have great faith in fools – self-confidence, my friends call it. – Edgar Allan Poe
It is better to weep with wise men than to laugh with fools. – Spanish Proverb
The greatest lesson in life is to know that even fools are right sometimes. – Winston Churchill
If every fool wore a crown, we should all be kings. – Welsh Proverb
A fellow who is always declaring he’s no fool, usually has his suspicions. – Unknown
Lord, what fools these mortals be. – William Shakespeare
Young men think old men fools, and old men know young men to be so. – Metcalf
It is the ability to take a joke, not make one, that proves you have a sense of humor. – Max Eastman
A fool may be known by six things: anger, without cause; speech, without profit; change, without progress; inquiry, without object; putting trust in a stranger, and mistaking foes for friends. – Arabian Proverb
Talk sense to a fool and he calls you foolish. – Euripides
Fool me once, shame on you; fool me twice, shame on me. – Chinese Proverb
The trouble with practical jokes is that very often they get elected. – Will Rogers
Don’t give cherries to pigs or advice to fools. – Irish Proverb
A sense of humor is the ability to understand a joke-and that the joke is oneself. – Clifton Paul Fadiman
A man always blames the woman who fools him. In the same way he blames the door he walks into in the dark. – Henry Louis Mencken
Happy Fool’s Day Everything is funny as long as it is happening to somebody else._Unknown
A wise man never knows all, only fools know everything. – Proverb quotes