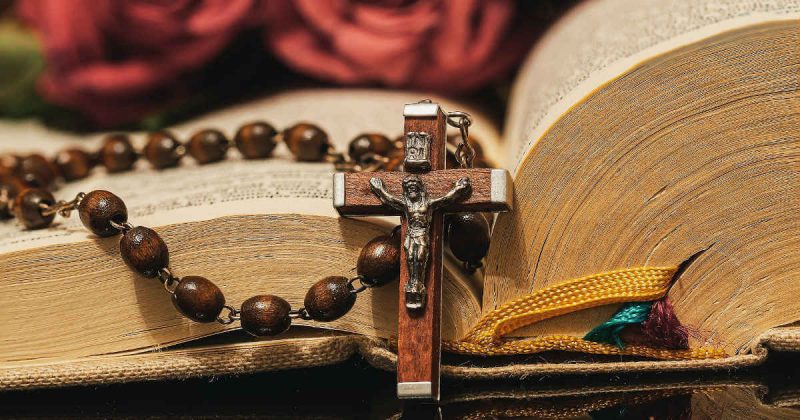 The Joyful Mysteries
(Mondays and Saturdays)

“Blessed are you among women and blessed is the fruit of your womb. Blessed is she who trusted that the Lord’s words to her would be fulfilled.” (Luke 1: 42, 45)

The Birth of our Lord Jesus

While Mary and Joseph were in Bethlehem, she gave birth to her first-born son and wrapped him in swaddling clothes and laid him in a manger. (Luke 2: 6, 7)

When the day came to purify them according to the law of Moses, Mary and Joseph brought Jesus up to Jerusalem so that he could be presented to the Lord. (Luke 2: 22)

The Finding in the Temple

They came upon him in the temple sitting in the midst of teachers, listening to them and asking them questions. All who heard him were amazed. (Luke 2: 46, 47)

The Mysteries of Light
(Thursdays)

The spirit descended like a dove on him. And a voice came from heaven, “you are my son, the Beloved; and with you I am well pleased.”(Mark 1: 10)

Jesus changed water into wine at the wedding in Cana, the first of his signs, and revealed his glory; and his disciples believed in him. (John 2: 11)

“The time is fulfilled, and the Kingdom of God has come near; repent, and believe in the good news.” (Mark 1: 15)

And he was transfigured before them, and his face shone like the sun, and his clothes became dazzling white. (Mathew 17: 2)

Institution of the Eucharist

He took bread, gave thanks, broke it and gave it to them, saying, “This is my bodywhich is given for you. Do this in remembrance of me.” (Luke 22: 19)

The Sorrowful Mysteries
(Tuesdays and Fridays)

The Agony in the Garden

Jesus went with them to a place called Gethsemane. He advanced a little and fell prostrate in prayer. “My father, if it is possible, let this cup pass me by.” (Matthew 26: 36, 39)

The Scourging at the Pillar

The people said, “Let his blood be upon us and upon our children.” At that, he released Barrabbas to them. Jesus, however, he first had scourged. (Matthew 27: 25, 26)

The Crowning with Thorns

They stripped off his clothes and wrapped him in a scarlet cloak. Weaving a crown out of thorns, they fixed it on his head and began to mock him. (Matthew 27: 28, 29)

The Carrying of the Cross

Jesus was led away, and carrying the cross by himself, went out to what is called the place of the skull. There they crucified him. (John 19: 17, 18)

The Crucifixion and Death

The curtain in the sanctuary was torn in two. Jesus uttered a loud cry and sain, “Father, into your hands I commend my spirit.” After this he expired. (Luke 23: 45, 46)

The Glorious Mysteries
(Sundays and Wednesdays)

The angel spoke, “Do not be frightened. I know you are looking for Jesus the crucified, but he is not here. He has been raised, exactly as promised.” (Matthew 28: 5, 6)

He then led them out near Bethany, and with hands upraised, he blessed them. As he blessed them, he left them, and was taken up to heaven. (Luke 24: 50, 51)

The Descent of the Holy Spirit

Tongues as of fire appeared which parted and came to rest on each of them. All were filled with the Holy Spirit. (Acts 2: 3, 4)

May you be blessed, my daughter, by God most high, beyond all women on earth; and may the Lord God be blessed, the creator of heaven and earth. (Judith 13: 18)

A great sign appeared in the sky, a woman clothed with the sun, with the moon under her feet and on her head a crown of twelve stars. (Revelation 12: 1)

Sample Prayer Before Meal
Prayer To St. Michael
Powerful Prayers For Fruit Of The Womb (Child)
Prayers for Protection