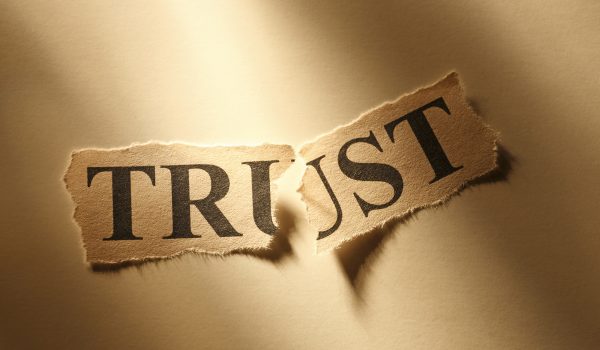 Trust is a process of validating a person’s behavior attitude and character, it is faith in someone and strong belief that they will not betray or hurt you. The painful thing about trusting someone is that most times the ones we trust are the ones who actually betray us.
Whether you have been cheated on, lied to or betrayed by the people you hold dear to your heart, or you know someone who is dealing with betrayal or broken trust.

We have a collection of quotes about broken trust to help you learn and grow past the pain and betrayal.

Everyone suffers at least one bad betrayal in their lifetime. It’s what unites us. The trick is not to let it destroy your trust in others when that happens. Don’t let them take that from you.~ Sherrilyn Kenyon
A relationship without trust is like having a phone with no service. And what do you do with a phone with no service? You play games.~ Unknown
You don’t repair that relationship by sitting down and talking about trust or making promises. Actually, what rebuilds it is living it and doing things differently.~ Patricia Hewitt
“I trusted you but now your words mean nothing because your actions spoke the truth.”
Rebuilding trust when it’s been broken is not dependent only on the person who has broken it, or how many times they can prove they are honest. It depends on the person who has decided not to trust anymore. Though they may be totally justified in their decision not to trust, as long as they choose not to, the relationship has no hope of survival and should be ended. If or when they decide to trust again, there is hope reborn. —Doe Zantamata
I was never one to patiently pick up broken fragments and glue them together again and tell myself that the mended whole was as good as new. What is broken is broken, and I’d rather remember it as it was at its best than mend it and see the broken pieces as long as I lived. —Margaret Mitchell
If you give your trust to a person who does not deserve it, you actually give him the power to destroy you.- khaled saad
I’m a good enough person to forgive you, but not stupid enough to trust you again.
“When a river of tears and a load of grief keep on flowing from a mountain of broken trust, feelings may relentlessly besiege the stronghold of our flesh. Only a timely adjustment with our mental compass can shore up confidence, resilience; and reliance. (“Taken for a ride”)”― Erik Pevernagie
“That’s the thing about trust. It’s like broken glass. You can put it back together, but the cracks are always visible–like scars that never fully heal.”― Hope Collier
The saddest thing about betrayal is that it never comes from your enemies. —Anonymous
What do people gain from lying? Besides losing: your respect, your dignity, your reputation, and those who love you. I guess those few minutes of satisfaction, smiling behind your lies, are soon well worth a lifetime of a regretful guilty conscience. —Amir Riveroll
“When trust is broken, there is not any medicine to recover that again, as it was before, even you try hard to gain back”― Ehsan Sehgal
Pain changes people, it makes them trust less, overthink more, and shut people out. —Unknown
Sometimes trusting a friend is the hardest thing to do, even the closest friends can become enemies. —James Merrow
The worst thing about being lied to is knowing you’re not worth the truth. —Unknown
“Sorry” works when a mistake is made, but not when trust is broken. So in life, make mistakes but never break trust. Because forgiving is easy, but forgetting and trusting again is sometimes impossible. —Unknown
Broken trust doesn’t have to mean the end of your story. It’s time to write the next chapter. —Unknown
It is better to suffer wrong than to do it, and happier to be sometimes cheated than not to trust. —Samuel Johnson
Betrayal is the worst… and the key to moving past it is to identify what led up to it in the first place.~ Charles J. Orlando
People have to pretend you’re a bad person so they don’t feel guilty about the things they did to you. —Unknown
It is easier to forgive an enemy than to forgive a friend. —William Blake
“It is important not to trust people too much.” – V. S. Naipaul
If you have been brutally broken, but still have the courage to be gentle to others, then you deserve a love deeper than the ocean itself. —Nikita Gill
Don’t trust the person who has broken faith once.-William Shakespeare

You must trust and believe in people, or life becomes impossible.~ Anton Chekhov
Once trust is broken, some attitudes would have to be changed because they are needed to establish trust.
“It takes a lot of truth to gain trust but just one lie to lose it all.”
“There’s ways you can trust an enemy you can’t always trust a friend. An enemy’s never going to betray your trust.” – Daniel Abraham
Trust but verify. —Ronald Reagan
You will never understand the damage you did to someone until the same thing is done to you. That’s why I’m here. —Karma
“It was a mistake,” you said. But the cruel thing was, it felt like the mistake was mine, for trusting you. —David Levithan
You may be deceived if you trust too much, but you will live in torment unless you trust enough. – Frank Crane
“I may have trust issues, but some people seem to have an issue with the responsibility of being trusted.”― Melchor Lim
“If someone you love hurts you cry a river, build a bridge, and get over it. “

Trust is not simply a matter of truthfulness, or even constancy. It is also a matter of amity and goodwill. We trust those who have our best interests at heart, and mistrust those who seem deaf to our concerns.~ Gary Hamel
“Trust takes years to build, seconds to break, and forever to repair.”
“There’s never a reason to trust someone. If there’s a reason, then it’s not trust.” – Gerald Morris
The finest souls are those who gulped pain and avoided making others taste it. —Nizariat
Trust is like a mirror, you can fix it if it’s broken, but you can still see the crack in that mother f*cker’s reflection. —Lady Gaga
“Betrayal annihilates trust. The more trust there is to begin with, and the more deception is involved, the more damage is done.”― Sandra Lee Dennis
“Each betrayal begins with trust.”― Phish, Phish
The trust has broken down. It will take some time to change attitudes and attitudes are going to be needed to develop trust, Jim Leach
“If I cut you off, chances are, that you handed me the scissors.”-Unknown Author
I trusted you with my heart, I just did not expect to get it in pieces.