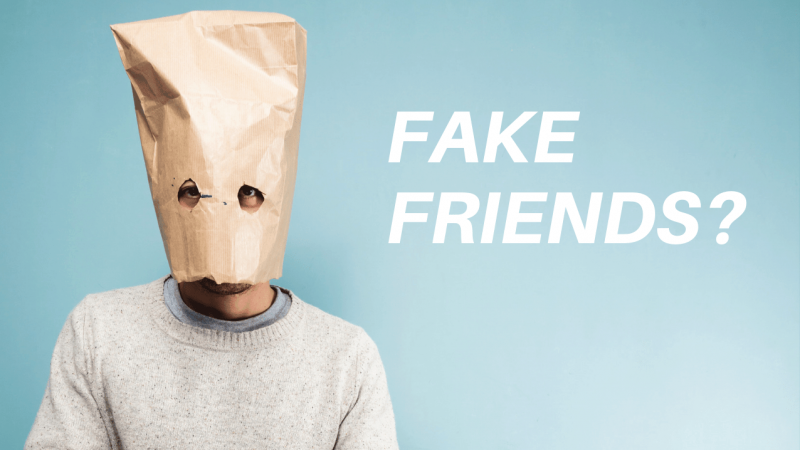 Friends come and go, some leave remarkable footprints in our life while others leave unspeakable scars and betrayals. Unfortunately, we all have to deal with fake friends at some point in our lives.

Whether you are getting over a recent friend betrayal or just being cautious about it, share this collection of Fake Friends Quotes and Fake People Quotes via WhatsApp, Facebook, Instagram or any other social media platform to express your thoughts!

Fake people hate honesty. It’s the lies that keep them feeling good about themselves and their lives. So share your true feelings about their actions and watch how they fade away
Cut off fake people for real reasons, not real people for fake reasons.
The saddest thing about BETRAYAL is that it never comes from your enemies.
Both true friends and fake friends congratulate you if you do something right but only a true friend will tell you if you do something wrong.
Sorry i’m not perfect, but i’m not fake either.
“Always remember that you were once alone, and the crowd you see in your life today are just as unecessary as when you were alone.”― Michael Bassey Johnson
An honest enemy is better than a best friend who lies. You always know after shitty things happened, who your friends really were.
Everybody isn’t your friend. Just because they hang around you and laugh with you doesn’t mean they are your friends. People pretend well. At the end of the day, real situations expose fake people, so pay attention.
Haters will be all in your face wishing you good luck but behind your back praying to God you fall off.
If there were no cheaters and betrayers, you would never know who your true friends are. If there were no haters, you would never know when you are doing right.
“Be very careful of who you share your problem with, remember that not every friend that smiles at you is your best friend.” Kemmy Nola
“Most people want to see you do better, but not doing better than them.” – London Mond
“An insincere and evil friend is more to be feared than a wild beast; a wild beast may wound your body, but an evil friend will wound your mind.” – Buddha
I used to think enemies were the worst people in the world, however that was until the point when I met fake friends and realized that they’re a lot worse.
I don’t think that you can fake warmth. You can fake lust, jealousy, anger; those are all quite easy. But actual, genuine warmth? I don’t think you can fake it. Keira Knightley

Don’t fear the enemy that attacks you, but the fake friend that hugs you.
Sometimes its not the person who change, it’s the mask that falls off.
A fake friend can cause much more damage to you than a real enemy.
Always sleep with one eye open. Never take anything for granted. Your best friends might just be your enemies.
Success will surely bring back the friends that disappeared during your struggle, but then they will be grouped as fans.
Fake friends are like autumn leaves, they’re scattered everywhere.
Fake friends; those who only drill holes under your boat to get it leaking; those who discredit your ambitions and those who pretend they love you, but behind their backs they know they are in to destroy your legacies.”― Israelmore Ayivor
Fake friends: once they stop talking to you, they start talking about you.
Fake friends are like shadows. They follow you in the sun but leave you in the dark.
People, if you evaluate me and see that I’m not good enough for you, just keep on going your way and let me go mine. I don’t need fake friends and you don’t need the fake friendship either.
Talk about the mistakes you’ve made, your battles, and struggles then wait. Those who stick around are the true friends. Fake people can’t handle struggle.
“Fake friends are like shadows: always near you at your brightest moments, but nowhere to be seen at your darkest hour. True friends are like stars, you don’t always see them but they are always there.” – Habeeb Akande
One fake friend can do more damage than 5 enemies.
It’s hard to trust somebody when the person who you completely opened up to is the person who later completely betrayed you.
Some of the most poisonous people come disguised as friends and family.

Stay real. stay loyal or stay away from me.
Sometimes, you have to give up on people. Not because you don’t care but because they don’t.
Dear two-faced friend, I can’t seem to decide which face of yours to slap first.
Sometimes your dearest friend whom you reveal most of your secrets to becomes so deadly and unfriendly without you knowing that they were not really your friend.”― Michael Bassey Johnson
Growing up means realizing a lot of your friends aren’t really your friends.
Friends are like boobs: some are big, some are small, some are real, some are fake.
Don’t be sad or afraid when you start losing friends, be glad you’re getting rid of the fake ones. Stay true to yourself.
Everyone has this weird friend who’s making sad long face every time you achieve something really good. Get rid of such people, please.
You are fair weather friend, the type that comes only when the sun shines, the one who’s too scare to stand with me in the hurricane.
“It is only the great hearted who can be true friends. The mean and cowardly, can never know what true friendship means.” Charles Kingsley
Sometimes the person you are willing to take the bullet for is the one who pulls the trigger.
Some people are real. Some people are good. Some people are fake and some people are real good at being fake.
When your so called friends say they have your back, make sure they’re not holding a knife.
What’s the whole point of being pretty on the outside when you?re so ugly on the inside? Fake Friends Everywhere!
I’m sorry, I guess you didn’t get the memo. You have officially been removed from my life so you can stop stalking me any day now.