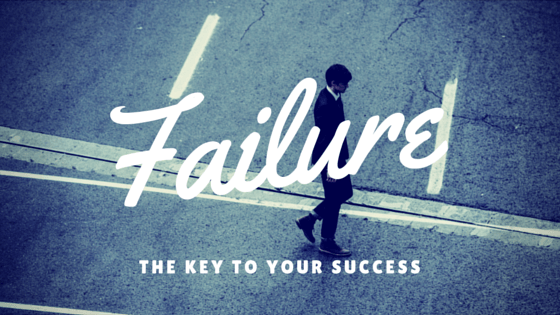 It is inevitable that you will experience failure in the pursuit of success. In fact, you will probably fail more times than you will succeed. But the simple truth is – no great success was ever achieved without failure. If only some of us were able to build the right attitude to failure then we would better handle success.

There’s a strong relationship between success and failure. That’s why we have compiled motivational quotes to help you push forward amidst failure and challenges of life.

Just because you fail once, doesn’t mean you’re gonna fail at everything. Keep trying, hold on, and always, always, always believe in yourself, because if you don’t, then who will, sweetie?” — Marilyn Monroe
Losers quit when they fail. Winners fail until they succeed. Robert T. Kiyosaki
What you call yourself is much more important than what people call you, so if someone thinks you are a failure, you have a choice to prove them wrong or to sulk.
Every adversity, every failure, every heartache carries with it the seed of an equal or greater benefit.” – Napoleon Hill
“Failure should be our teacher, not our undertaker. Failure is delay, not defeat. It is a temporary detour, not a dead end. Failure is something we can avoid only by saying nothing, doing nothing, and being nothing.” —Denis Waitley
“I can accept failure, everyone fails at something. But I can’t accept not trying.”
– Michael Jordan
“She was unstoppable, not because she did not have failures or doubts, but because she continued on despite them.” Beau Taplin
Failure is not falling down but refusing to get up.” — Chinese proverb
“A person who never made a mistake never tried anything new.” —Albert Einstein
Failures are only stepping stones when you do not embrace them as an identity but see them as a question demanding you to discover your greatest potentials.
Winners are not afraid of losing. But losers are. Failure is part of the process of success. People who avoid failure also avoid success.
“Most great people have achieved their greatest success just one step beyond their greatest failure.” —Napoleon Hill
“The only thing that separates success from failure is one last attempt. Try one more time and you will get lucky.” — Apoorve Dubey
“An inventor fails 999 times, and if he succeeds once, he’s in. He treats his failures simply as practice shots.”
– Charles F. Kettering
If winning was the end game, then you wouldn’t mind a few stops and bumps along the way because that’s all failure truly represents.
Do not judge me by my successes, judge me by how many times I fell down and got back up again.” — Nelson Mandela
“Ever tried. Ever failed. No matter. Try Again. Fail again. Fail better.” —Samuel Beckett
You need to see failure like a shovel because they can either serve for burying your gifts or you can use them to dig up all your hidden potential.
There is only one thing that makes a dream impossible to achieve: the fear of failure.” – Paulo Coelho
“When you take risks you learn that there will be times when you succeed and there will be times when you fail, and both are equally important.” —Ellen DeGeneres

“We need to accept that we won’t always make the right decisions, that we’ll screw up royally sometimes—understanding that failure is not the opposite of success, it’s part of success.” —Arianna Huffington
I have not failed. I’ve just found 10,000 ways that won’t work.
Those who fail today can remain flat on their backs, regretting the opportunities lost or they could be on their feet seeking out the next opportunity for adventure.
When we give ourselves permission to fail, we, at the same time, give ourselves permission to excel.” – Eloise Ristad
“It is impossible to live without failing at something, unless you live so cautiously that you might as well not have lived at all – in which case, you fail by default.” — J.K. Rowling
Fail as many times as it would take you to find out what works because in the end all that matters is that you’ve figured out how to make the engine run.
“You must make a decision that you are going to move on. It wont happen automatically. You will have to rise up and say, ‘I don’t care how hard this is, I don’t care how disappointed I am, I’m not going to let this get the best of me. I’m moving on with my life.”― Joel Osteen
The secret of life is to fall seven times and to get up eight times.” — Paulo Coelho
“Failure is the condiment that gives success its flavor.” —Truman Capote
If you’re not prepared to be wrong, you’ll never come up with anything original.
“Failure is another stepping stone to greatness.” —Oprah Winfrey
You are not a failure and you need to quit telling yourself that you could have avoided failing because no successful person ever avoids the pain in hopes for the gains.
“A man may fail many times but he isn’t a failure until he begins to blame somebody else.”
– John Burroughs
No human ever became interesting by not failing. The more you fail and recover and improve, the better you are as a person. Ever meet someone who’s always had everything work out for them with zero struggle? They usually have the depth of a puddle. Or they don’t exist.” – Chris Hardwick
It’s fine to celebrate success but it is more important to heed the lessons of failure.” — Bill Gates
I’ve come to believe that all my past failure and frustration were actually laying the foundation for the understandings that have created the new level of living I now enjoy.
Tony Robbins
Don’t be so eager to win that you forget that failure is also a part of the process that makes up a champion.
Everything you want is on the other side of fear.” – Jack Canfield
“Don’t worry about failures, worry about the chances you miss when you don’t even try.” —Jack Canfield